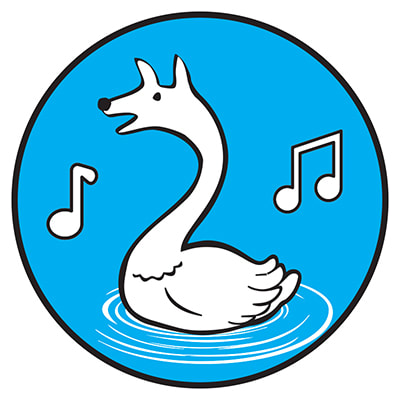 Letter from Kerry and Jess.

Indeed, this is my swan song. At noon today, Jess Cefai (manager of our Knoll location) purchased Camp Fido Dog Daycare and is now its new owner. I am officially retired! Before I begin my swan song, let me say that nothing about your experience and relationship with Camp Fido will change. Under Jess’ leadership, all of Camp Fido's services will remain the same and all of your passes will transfer seamlessly. The only thing different is there will be a cuter face at the helm of this ship.

And so my song begins…

When I opened Camp more than 19 years ago, I had one paying customer, many sleepless nights, and whole lot of doubt about what I just gotten myself into. Fortunately, I had some graphic design jobs to fall back on, and slowly one camper became two campers, and two campers became three campers… I am grateful for the fact that Camp Fido grew and matured in a very organic way. It allowed me to build things as they needed to be built – from both a staffing and facilities standpoint. And, I had a lot of good friends who helped me get jobs done including wrangling, building fences and retaining walls, mowing and snow plowing and advising me on the business end of things. In the early days, I had no idea the scope of what we were building. We were just doing what needed to be done because this place was getting popular!

When I opened Camp Fido, the dog daycare industry was still quite young. I chose dog daycare because (obviously) I loved dogs, but also because I was looking for a job that was not as sedentary as my life as a writer and graphic designer. I imagined my days being surrounded by dogs and maybe an additional wrangler or two. What I didn’t imagine was what it would be like to meet all of the humans at the end of our campers’ leashes. Dog wranglers tend to be introverts. We do not seek a ton of human interaction. But what I discovered is that I really, really, liked (loved) my customers! I have known some of you since the beginning, and many of you have become good friends. I can think of no other community of folks that I would rather spend time with than Camp Fido customers. In fact, I liked you all so much that you inspired me to create ways to spend more time with you including the Peace Pack at the KHS Dog Walk, Dancing with Dogs in the Do-Dah Parade and hosting a bunch of super fun Customer Appreciation parties and Howl-O-Ween events. We are bonded together by our love or dogs, and I have discovered that is a pretty indelible bond. Believe it or not, I am going to miss you all as much as I will miss your dogs!

When I opened Camp Fido, my vision for staffing was quite conservative. My five-year business plan included four wranglers by year five. I am not sure when I actually hired my fourth wrangler, but I think it was at the end of our first year. By year five, we had 11 wranglers on staff. We now employ 20. To say our wranglers are amazing is an understatement. They are knowledgeable, patient and loving. They treat your campers like they are their own. (I see them kissing your dogs all of the time.) On top of that, they are a super group of people. And, despite the fact that this is not the highest paying profession, they stick around. The average tenure of our wranglers is 5.5 years (four of whom have been here for more than 10 years). They work here because they love dogs – your dogs. They are freaking amazing! (And they have all agreed to sign on as wranglers for Jess!)

When I opened Camp Fido, I had no idea how much I would absolutely grow to love this job. In hindsight, I can think of no other way that I would have wanted to spend the last 20 years of my life. I abhor repetition. Camp Fido brought me new challenges every day. Some challenges I could have done without, but I can honestly say that there have been no two days alike in the past 20 years. As a result, I have ALWAYS looked forward to coming to work. As my friend Phyllis says, “You never have to work a day in your life when you love what you do.” It is true.

When I opened Camp Fido, I never thought I would sell it. (Who thinks like that?) But as I considered selling this business, I knew there was only one thing that mattered: it had to be sold to someone who knows the culture of Camp Fido and loves it just as much as I do. Today I sold Camp Fido to a very amazing and capable person. Jessica Cefai has been a leader, organizer and absolute dog magnet at Camp Fido for nearly 13 years. Her skills as a dog wrangler are top notch. Her ability to manage and organize chaos is noteworthy. She is an excellent listener and communicator. And, above all else, she is a little bit silly. We love silly at Camp Fido! Best of all, I think all of you know Jess. She has been responsible for enrolling dogs since 2016 (when we had a waiting list of 100+ dogs). If you haven’t met her in person, chances are that you have spoken to her on the phone. She is a terrific person, and I know she will continue to make Camp Fido better and better.

When I opened Camp Fido, I never thought I would be saying goodbye. It is so much more difficult than sitting in an office, alone, with two dogs in the daycare wondering, “What have I done?” But, alas, it is time to pass the torch. I am ready to spend more time with my family and friends, hike more with my dogs, travel more, read more, cook more, bike more, garden more and maybe even learn to take a nap. I will miss you all and have so much gratitude for each and every one of you who have entrusted your kids with us. It has truly been an honor to be a part of your lives. May you all be well. I love and appreciate you and hope to see you down the road…

I’m humbled by Kerry’s lovely introduction. (She’s right, I am very silly and I love Camp Fido.) I am excited to take the wheel and I look forward to being around both locations more often so I can catch up with old friends and make some new ones as well – dogs and people alike! I’m also eager to put some faces to people I haven’t met in person yet. Kerry is right about the customers: all of you make this place so special and we can certainly feel the love. Because I’ve worked with so many of you outstanding folks over the last 13 years, I know this transition will be easier because of you.

I’m aware I’ve got some big shoes to fill, and I know I’m not the only one who feels this transition is bittersweet. While I am thrilled about this new chapter in my life, I know it means I won’t get my daily dose of Kerry. She is a truly special person, and I wouldn’t be where I am today if it wasn’t for her guidance, support and friendship. That being said: I know all of us, both customers and employees (we haven’t had the heart to tell the dogs yet) are excited for her to move on to the next chapter of her life. Don’t worry, though, I’ll make sure she sends us some postcards.

I’m incredibly grateful for Kerry’s grit and determination in the early days to bring Camp Fido to fruition. She’s built the train AND the tracks, the train is chugging along, and I am excited for opportunity to keep us moving into the future! My goal is to continue to deliver the same Camp Fido experience we all know and love, but that doesn’t mean things will get stale. Camp Fido has always been committed to thinking outside the box and finding ways to improve, so if you notice anything different, it will be for good reason!

I look forward to this not so new adventure with all of you!